In 1990, Jim Ozier followed the founder of a 7-year-old church, Trietsch Memorial UMC in Flower Mound, Texas. In his role as the second pastor for this young congregation, he learned first-hand how difficult the transition of pastoral leadership can be when a church has never done it before! When he left nearly 18 years later, the church had grown to more than 4,000 members and helped birth 3 new congregations. In addition, Jim saw how critical the “passing of the baton” is for the successor pastor following a long-tenured pastorate.

“I absolutely love coming alongside pastors and churches to help them get clear on their culture, improve their hospitality, and accelerate their growth… even if they are going through a pastoral transition!”

In 2008, Jim felt God’s nudging to leverage his own experiences and help 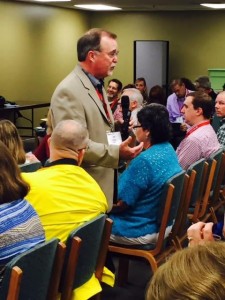 other pastors going through critical leadership transitions. He became a trained coach—networking closely with Jim Griffith Coaching, and with Path1 of the United Methodist Church.

Serving on the Appointive Cabinet of the North Texas Conference of the United Methodist Church for 6 years as the Director of New Church Development and Congregational Transformation, Jim brings consultative insights and experience to Bishops and Cabinets dealing with issues of church culture, growth and vitality.

Jim has trained more than 20,000 pastors and church leaders in over thirty Annual Conferences in the areas of:

Jim has presented at the Church of the Resurrection Leadership Institute, and keynoted the Indiana Annual Conference. He has contributed articles for a variety of national publications, such as “The Circuit Rider” and “Leading Ideas,” and keynoted at United Methodist Annual Conferences sessions and spoken at numerous venues.